The Seattle-Perugia Sister City Association (SPSCA) is excitedly and ambitiously moving forward with our Migration Project to continue SPSCA’s mission of cultural and artistic exchange. In 2022, our goal is to send 5 Seattle artists to Perugia, Italy to exhibit their artwork alongside 5 perugini artists at the Palazzo della Penna Museum. And we need your help!

The exhibit is a joint endeavor supported by the Seattle-Perugia and Perugia-Seattle Sister City Associations, The City of Perugia, and the Palazzo della Penna Museum in Perugia. If time and pandemic recovery permit, we hope to have a preview exhibition in Seattle or artist interviews to share their work with you. 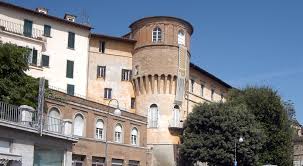 Photo of Civic Museum of Palazzo della Penna by http://turismo.comune.perugia.it/

We can’t do it alone! The artists will have expenses including travel and shipping of their works to Perugia. We anticipate the cost of the project to be $20,000 USD to properly fund this cultural exchange of a lifetime including installation of their work, modest travel, meeting local artists, touring the ancient Etruscan city of Perugia, Umbria and learning about our 25-year relationship with our sister city.

With 100% support from our Board, we've surpassed our Phase Two goal - - over $10,000!- - prior to granting the awards to the artists later this year. And now we need your help, already 19% of members have donated! Please give today!

>> Click Here to Donate online to the Migration Project

Please reach out with any questions to [email protected]. Our sister city cultural work is more important now than ever before.

About the Migration Logo, by graphic designer Busara Teuber:
The Migration Logo for this project is inspired by the 2 symbolic winged creatures from Perugia and Seattle.

The mythical Griffin, head and wings of an eagle, body of a lion, is the official city symbol of Perugia. Perugia chose this creature as its protector during the Renaissance because of its association with strength, courage, and intelligence, and the symbol can be found all over. The wings give it speed; the claws give it ferocious power.

The Great Blue Heron is the official City Bird of Seattle. According to North American Native tradition, the Blue Heron brings messages of self-determination and self-reliance. They represent an ability to progress and evolve. The long thin legs of the heron reflect that an individual doesn't need great massive pillars to remain stable, but must be able to stand on one's own.

Teuber graduated from The College of Fine Arts in Bangkok, Thailand, and moved to the US to continue her education. She received a bachelor degree from University of Washington with a graphic design major. For 7 years, she worked for corporate firms before starting her own design business in 2002. She founded Ilee Papergoods in 2007.