Join us for the members picnic August 13

This is the most popular event of the year! Join us for the annual members meeting and picnic on Sunday, Aug. 13 , 1 p.m. to 5 p.m. in Ravensdale, Wash., at the historic Borracchini farm. Only about 45 minutes from Seattle, this lovely corner of King County feels like a world away. 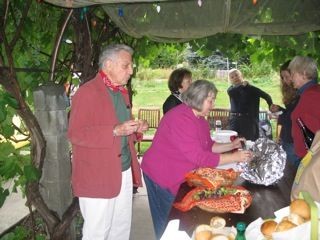 As usual, several delicious entrees will be provided. Our host, Dan Borracchini, will make the pasta, cooked al dente, and the SPSCA board will be grilling sausages. Everything else is potluck. That means you!

Please contribute a salad, antipasto dish, snacks or a dessert, plus whatever you'd like to drink, both alcoholic and non. RSVP here and tell us what's in your picnic basket and how many guests you are bringing.

The picnic is your chance to meet new members, catch up with old friends and learn what SPSCA has coming up for the rest of 2017. We'll also elect board officers. We have an opening for a board member this fall. If you'd like to join the board, send an email to [email protected] Tell us in about 100 words what you can bring to our group as a new board member.

Hope to see you on August 13. Bring your sunscreen, straw hats and hearty appetites! And don't forget your singing voices. Our event always includes a sing-along of Italian tunes, both old and new. Join us for an artist talk on Friday, June 23 at 7 p.m. at Pottery Northwest. It will be your opportunity to meet Qing Qu, the second recipient of the de Poi Award exchange program, sponsored in part by SPSCA.

The evening begins with light refreshments at 7 p.m., followed by a presentation by Qing, who will talk about her creative process, her residency at Pottery Northwest, and her first-ever visit to United States. It will also be a chance to tour the galleries and studio areas of Pottery Northwest and meet some of the local ceramic arts community.

Qing, a ceramic arts student in Perugia, was born in 1990 in Henan, China. She was chosen by a panel from the prestigious Accademia delle Belle Arti (Academy of Fine Arts) in a blind selection process. Qing arrived in Seattle on June 10 and is being hosted by staff and friends of Pottery Northwest. Her presentation will be in Italian with an English interpreter provided. The de Poi program, started in 2016, honors Alviero Moretti (1933-2010), founder of the Moretti ceramic studio and the Ceramic Foundation. The two sister cities alternate hosting a ceramic artist for three weeks each year.