Scholarship recipient Jen Provenzano is enjoying her third week in Perugia, attending the famed Universita per Stranieri. Read on to get her take on a recent soccer game in Perugia:

"At yesterday’s game against Frosinone, a city southeast of Rome, there were few children and more drunken amped-up young men in scarves, although some were hyped up on caffe -- the only concessions vendor allowed into the stands was selling little espresso cups.

Coming from Seattle and Seahawk territory, I had to check it out. Perugia is part of the “B Series” teams and they’re one of the best. (The “A Series” includes teams from Milan, Rome, Verona, Bologna, etc.)  The Seahawks is famous for its 12th Man;” during play, teams are allowed a maximum of 11 players, so the 12th Man signifies the fans, so loud that they influence play in the stadium. Soccer has a similar rule of number of players, and there was definitely a 12th Man present yesterday in Perugia.

Attending with a classmate from England and some very entertaining ex-pats living in Perugia, we kept saying it felt like a religious experience, that we were in a chiesa. Everyone around us had rehearsed chants that seemed to spring up out of nowhere in unison (nothing like “the wave” that can take 20 minutes to get going in American sports stadiums).

There were call-and-response chants to the opposing team’s fans on the other side of the stadium. Many insulting phrases hurled. Their 12th Man never left the field. It was just as much fun watching the fans as it was the players. There’s also something to be said about their game clock, which counted up instead of down as they do in the States…it felt as though we were working up to a crescendo rather than counting down to the end. And no scoreboard, you had to be paying attention…but there’s no way to miss it when we win, and that we did yesterday!"

Look for our booth at Festa Italiana this weekend

Our sister city group will have a booth at Fisher Hall this weekend (Sept. 23 and 24) as part of Festa Italiana. Be sure to stop by, say hi and buy your raffle tickets. 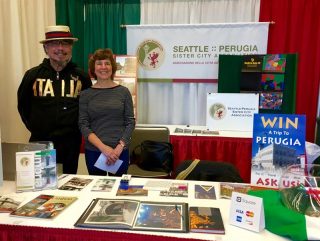 Festa will be extra-special this year, as it celebrates its 30th anniversary. Headliners for both days include opera tenor Aaron Caruso (hmmm, why does that name sound familiar?) and internet cooking sensation, Rossella Rago, who stars in the popular Cooking with Nonna show and has just published a cookbook with the same title.

On Friday, Sept. 22, you will find several board members at the "Taste of Italy." This lively wine tasting starts at 7 p.m. at Seattle Center, and includes music by Danny Quintero and a fantastic spread catered by Big John's PFI. Not to mention wine! Tickets are $25 per person for the Friday night wine tasting.

Check out the activities and schedule at the Festa website.

Only three weeks remain until the dedication of Piazza Perugia on Sat. Oct. 14 at 10 am. We hope all our members will join us at the dedication ceremony and related events. You'll meet our distinguished guests from Italy, rub elbows with our local Italian community, and get to know 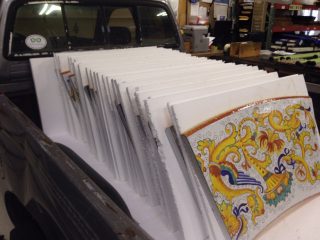 The tiles were designed and fabricated by L'Antica Deruta, a ceramic arts studio outside Perugia, under the direction of Giorgio Moretti, who will be attending the opening festivities.

Member Jen Provenzano is in Perugia for the month of September, after being awarded a one-month scholarship to study at the Universita per Stranieri. Here is her second report from the field.

Want to study in Perugia like Jen? Apply for a 2018 sister city scholarship. Application deadline is Oct. 31. Learn more here.

"I recently asked the owner of my favorite caffé close to Piazza Danti in Perugia what makes a good tourist. She said first, they have to be polite, and second, it’s nice when they try the language, even if it's just 20 words.. I’ve been thinking of this concept a lot after arriving in Perugia two weeks ago. And since Perugia is so centrally located, it was a breeze to get on a train and visit Florence and Pisa this past weekend. Getting a taxi at the train station to the leaning Tower in Pisa, the driver didn’t even ask me where I wanted to go, she just said, “Andiamo!” 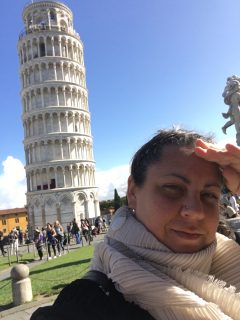 I wanted to engage a bit more, so I explained (in Italian) that I naturally wanted to go to the Tower, but I asked her if she lived in Pisa. “Si, vicino,” she said and smiled, explaining she liked going along the Arno River downtown and some other local places. She said tourists aren’t always nice, but it’s her job.

I decided to I wanted to be a “tourist plus” or “turista più,” as I’m calling it. I want to be a respectful traveler to the locals, for aren’t the locals the most authentic part of the trip? I applied this concept recently on a hunt for a scarf. I stopped into a lovely shop in Perugia where I exchanged greetings with the clerk. After a minute, I re-approached her, explaining in Italian that I am a student and was looking for a light summer scarf. She then started talking in a flurry of Italian and showed me a seemingly secret drawer where she pulled out scarves in different colors, explaining why one was better than the other. (I purchased a fantastic beige one, pictured.) I’m learning L’Universita is my local humble passport to live and travel as a “turista più”!"

Check back later to read Jen's next installment about her month in Perugia!

The Sept. 14 issue of the New York Times highlighted Perugia in its popular "36 Hours in..." column. Reporter Ondine Cohane characterizes the city as "untouristy and authentic," calling it one of Italy's most underrated destinations, filled with remnants of an ancient past. 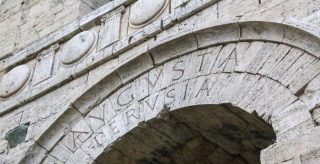 If a visit to Perugia is in your future, you'll find plenty of great recommendations in the article for restaurants, cafes and things to do here.