In early November, Gov. Jay Inslee visited Umbria, meeting with President Catiuscia Marini of the Umbria Region, Deputy Mayor Michele Fioroni of Perugia and a host of Italian aerospace business leaders. Inslee signed a memorandum of understanding with President Marini to strengthen collaboration on shared priorities such as aerospace, clean energy, climate change and trade. The photo below shows Inslee and his wife meeting with Deputy Mayor Fioroni. 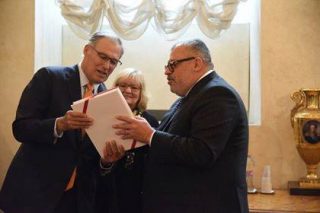 Those of you who attended the opening of Piazza Perugia in October will remember Fioroni, who was one of the speakers on the official program that day. Following the piazza celebration, sister city board members arranged for Fioroni to meet with many business leaders in Seattle -- from Boeing to Microsoft.

Umbria is home to a robust aerospace cluster and more than 35 companies that are suppliers to Boeing, Mitsubishi and U.S. military aerospace contractors.The aerospace firm, Umbra Cuscinetti, an important Boeing supplier located in Everett, has been a long-standing supporter of the sister city partnership and provided significant support for Piazza Perugia.

Read more about the governor's visit.